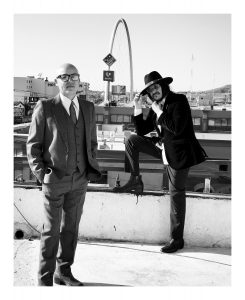 The city of Tijuana, Mexico, doesn’t shy away from tradition. Classic Mexican norteño can be heard along every inch of its boardwalks and beaches, either performed live by roaming buskers or blaring from the radio of a nearby restaurant. Every accordion note hangs in the air like the tangy ocean breeze and every strum of the guitar is a warming ray of sunshine. The sounds of Tijuana continue to permeate its now wall-high border, attracting audiences from San Diego and beyond with its timeless style.

However, at the turn of the 20th century when techno and rave music was on the rise and peaking in popularity, a group of likeminded local musicians toyed with the idea of combining Tijuana’s signature sounds with the new beats on the block. Nortec Collective was soon born from their desire to mesh old with new in an attempt to modernize norteño and bring it to audiences around the world. The group’s original seven members—Bostich, Fussible, Clorofila, Hiperboreal, Panoptica, Plankton Man and Terrestre—had unmistakingly created a new genre called “nortec,” a literal meld of norteño and techno that promised a new age for Latin electronica.

With accordions and guitars now backed by synthesized bass, looping snares and the occasional robotic voice, nortec was nearly an instant mainstream hit thanks to the Collective’s unique ability to turn the ambient paradise of Tijuana into a club track. Nortec Collective’s 2001 debut The Tijuana Sessions Vol. 1 brought the group’s members to stages all over the world, including New York’s Central Park SummerStage and the Royal Festival Hall in London. Their extremely successful and danceable take on the genre of norteño also earned the group recognition among well-known artists, with Beck, Lenny Kravitz and Calexico tapping the Collective for remixes of their more popular songs. Regardless of an absent Vol. 2, their second album Tijuana Sessions Vol. 3 was one of their most successful projects, earning the group two Latin GRAMMY Award nominations for Best Alternative Music Album and Best Recording Package in 2005.

With their place in the electronica history books secure, members of the Collective began to break off to pursue individual projects once more. Remaining members Ramón “Bostich” Amezcua and Pepe “Fussible” Mogt have continued to hold the Nortec Collective name high as its premier DJ duo. The combination of Bostich, who is often considered the “Godfather of Nortec” and has been developing the genre’s style since 1992, with Fussible, an audio-visual artistic mastermind who also played a significant role in creating the nortec sound, was a pairing destined for greatness; a truth that has proven itself repeatedly over the course of the last decade.

Operating as Nortec Collective Presents: Bostich + Fussible, their first album as partners—Tijuana Sound Machine—was released in 2008 and immediately earned the duo a GRAMMY Award nomination for Best Latin Rock/Alternative Album. Their 2011 album Bulevard 2000 earned them another GRAMMY Award nomination under the same category, and at this point the duo had established a diehard audience in Los Angeles that rivaled the support from their hometown. 2014’s highly successful Motel Baja is Bostich and Fussible’s most recent efforts as part of the Nortec Collective, and with a few world tours and several hundred concerts under their belts, the duo soon began to shift their studio endeavors towards a new type of electronic music. Their side project under their given names Amezcua and Mogt is pure synthesizers and rhythm kits with a distinct lack of brass. It’s a trade of tradition for pure experimentation, but in reality the duo are simply going back to their roots of creating something entirely new.

Los Angeles, a melting pot of culture old and new, is a perfect reflection of the essence of “nortec” music. Nortec Collective Presents: Bostich + Fussible is a global dance experience with it’s feet firmly planted in the traditional Mexican-American song canon.  There couldn’t be better (and more danceable) way to kick off a summer of free, live music –– make sure you RSVP and we’ll see you on the lawn tomorrow night!