Get ready for the inaugural Tamal Festival! 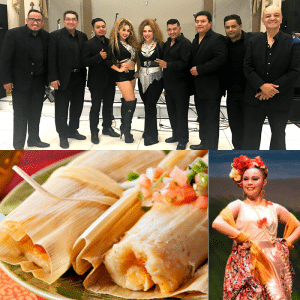 This Sunday, June 17, celebrate Father’s Day by embarking on an international culinary journey at Levitt LA’s first annual Tamal Festival! Enjoy delicious, creative spins on the classic tamale originating from Central and South America provided by a wide range of vendors known for mixing culture with cuisine. With dishes inspired by Guatemala and Argentina to Mexico and LA itself, our featured vendors include Viva los Cupcakes, Guatemalteca Bakery, Café Alba, The Tamale Cafe and award-winning Chef Eduardo Ruiz (nominated as a Top 10 Mexican chef by Food & Wine magazine and a rising star chef by the James Beard Foundation).

But that’s not all! The fiery, LA-based cumbia group Doris Montenegro y su Sonora Explosiva will take the Levitt Pavilion stage to soundtrack an evening filled with food and festivities. Opening for Montenegro is the oldest existing folk troupe in Los Angeles, Resurrección Mexican Folk. What better way to spend Father’s Day than with great food, music, family and friends! RSVP now and claim your spot.

Read on to learn more about the chefs, bakers, artists and dancers set to make the coming Sunday a treat for all. 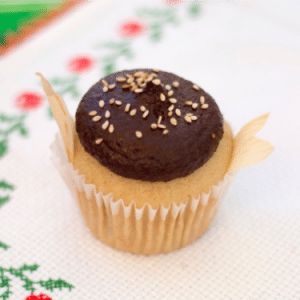 Viva Los Cupcakes is an award-winning specialty cupcake company which draws inspiration from Mexican regional foods and desserts to create unique cupcake flavors. Owner Karina Jimenez bakes and frost from scratch, mixing, grinding and roasting her way through traditional ingredients and popular street foods. Inspired by her memories of the markets in her home town, Jimenez launched Viva Los Cupcakes with a range of Mexican flavors never before explored in this form. Her signature Tamal con Mole cupcake has won several awards for its unparalleled combination of flavors. 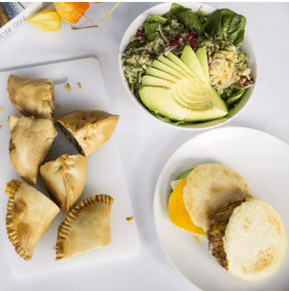 Located in the heart of the Fashion District in historic Downtown Los Angeles, Café Alba was born out of the partnership of two culinary student graduates from The New School of Cooking. Jorge Mora and José Albertini took their love for traditional cuisines – particularly empanadas – and began crafting authentic South American dishes for all. They provide a unique experience of the PanAmerican cuisine through a menu that’s both simple in its composition and complex in flavor. 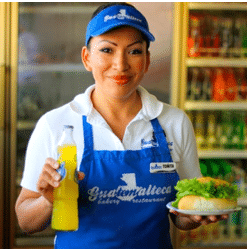 A family business that started as a started as a small bakery has now has become three full-service restaurants that are integral to the Los Angeles community. They have stayed true to their roots and continue to serve authentic Guatemalan food, bread and other South American treats for more than 35 years. 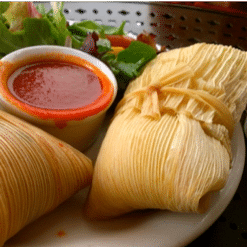 On the menu: Chipotle-style tamale bowl

Known for their Chipotle-style tamale bowl, The Tamale Café excels in combining authentic flavor with significant portions and options. Their homemade tamales are the talk of the town – and by LA standards, they’re also some of the most affordable!

Doris Montenegro is a former vocalist of the iconic Colombian musical troupe La Sonora Dinamita, a rotating collective of singers and musicians often credited with reviving the genre of cumbia within Latin America in the 1980s. When the group’s founder and main vocalist Lucho Argain passed away in 2002, Montenegro decided to pursue her own Sonora, and in 2005, Doris Montenegro y su Sonora Explosiva was formed with the intention of bringing Dinamita’s high-energy performances to new audiences.

Channeling the spirit and passion of Argain, Montenegro and her group take pride in lighting up music festivals and Jaripeos (rodeos) with traditional, trumpet-backed tropical cumbia. The nine-member band now includes her daughter Angel Juarez, following the footsteps of her mother and cultivating the continued history of Columbian cumbia. Most notably Doris Montenegro y su Sonora Explosiva have performed alongside the likes of Latin American mainstays such as Sonora Santanera, Angeles Azules and Grupo Control.

Since their inception 1961, Resurrección Mexican Folk has grown to over 75 dancers. The youth dance company developed by artistic director Rafael Valpuesta provides a ballet-infused style of Mexican folk dance to audiences throughout Southern California. Valpuesta himself took part in various professional dance companies throughout Los Angeles, including Adriana Astorga-Gainey’s Pacifico Dance Company and Jose Vence’s Grandeza Mexicana. Valpuesta recognized that Mexican folk dance was evolving to incorporate other disciplines that had a more theatrical style, and after traveling the United States and Europe on dance tours and working with a variety of dance master, he decided to combine ballet with Mexican folk dance as part of Resurrección Mexican Folk’s new standard routine.

From hot tamales to sun-soaked cumbia, the Tamal Festival is bringing the best of Los Angeles tradition to MacArthur Park this Sunday. Be sure to RSVP on our website and we’ll see you soon!