Why You Should Celebrate Colombian Independence Day at Levitt LA 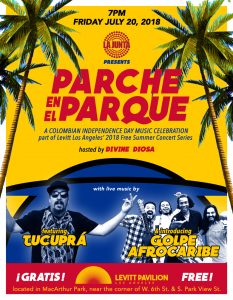 This Friday, July 20, La Junta presents Parche en en Parque, a celebration of Colombian Independence Day! Celebrated all over the world, July 20 commemorates the anniversary of Colombia’s first step towards liberation and the end of Spanish military occupation. On July 20, 1810, the colony created its first council in favor of self-governance, fueled by feelings of resistance against colonialism. Several rebellions were crushed before a final push by Simon Bolivar in the Battle of Boyaca of 1819 finally defeated the Spaniards, and the Republic of Colombia was born from the remnants of New Granada. This victory marked July 20 as the official day of Independence for Colombia.

July 20 celebrations include parades, political speeches, football games, street markets, flag waving, traditional foods such as tamales, empanadas and arepas, facepainting and plenty of Colombian folk music and dance. From older cumbia to contemporary latin reggae, all types and genres of Colombian sounds can be heard echoing the streets – not just in Colombia, but all over the world. Los Angeles is one such nexus of the Colombian diaspora, as home to the fourth largest Colombian-American population in the United States. Los Angeles is known for its Festival Colombiano, a massive party featuring live bands and DJs from the country that perform in front of thousands. The savory delights of Colombian cuisine can be found at mom & pop stores and delicatessens across the city.

This year Levitt LA is excited to host the city’s only free and all ages Colombian Independence Day celebration, featuring native artists Tucuprá and Golpe Afrocaribe. Tucuprá – a pioneer of Latin reggae movement within Colombia – played as part of The Coffee Makers through the early 2000’s, one of the first reggae roots and classic ska bands in the city of Medellín. After the widespread success of their album El Camino, Tucuprá released his first solo project, All Right (2013), which has been praised for its inventive mix of reggae with Colombian and Central American folk. Golpe Afrocaribe’s music is a similar intersection of cultures, functioning as an exploration of the deep African roots and legacies inherent in musical traditions of the Caribbean coasts of Mexico and Colombia. Levitt Los Angeles is honored to provide a platform to these artists and provide an accessible, vibrant gathering space to celebrate Colombian Independence Day.

Join us on Friday, July 20 by RSVPing here!