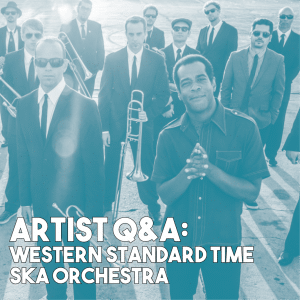 As the world’s torchbearer for Jamaican Jazz music, there are few bands that can match the intensity, soulfulness and chemistry that Western Standard Time Ska Orchestra embodies on stage. Made up of GRAMMY-award nominated session musicians, entertainment veterans and seasoned jazz improvisers alike, a rotating cast of more than 20 musicians make up the orchestra. Their uniquely infectious blend of two-tone ska and Big Band brass instrumentals are sure to get you dancing at their free show at Levitt LA this Friday (8/3)––we sat down with bandleader Eitan Avineri and learned a little bit about the band’s history and love affair with Jamaican music.

How did the band come together? Did it start small and grow with time?

A lot of us had been playing in the same LA-based jazz scene for years. A few years ago, I approached core members such as Brian Wallace, Brian Dixon and Korey Horn to start up the project. I had also gotten together with the late Benny Golbin to do all of the arrangements and play alto sax in the band. These were the humble beginnings of the band, which continued to expand over time.

Where did the idea of fusing Jamaican music with jazz sounds come from?

What are some of your biggest inspirations?

The Skatalites and the music they originated are our biggest inspirations, and our goal is to carry on the tradition of this musical style and lengthen the legacy they laid down before us.

Tell us about your favorite performance as a band.

Our show in Barcelona in 2016 would have to be my favorite performance, with México City being a close second. They were super fun!

As past performers at Levitt, what do free, outdoor concerts mean to you?

We love the fact that our live show can be enjoyed by anyone regardless of age, gender, and socioeconomic status at these performances. We really love that we can see a three year-old, a 33 year-old and an 83 year-old dance to our music at the same concert!

Be sure to RSVP for Western Standard Time’s free concert at Levitt LA this Friday, August 3 at 7 PM!