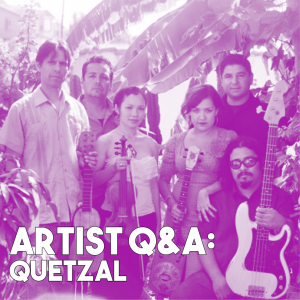 Few bands embody the intersection of art and activism better than Quetzal. Growing up in a family of labor union organizers, guitarist Quetzal Flores spent his formative years absorbing the rich history of grassroots movements across Mexico and Southern California, including the Zapatista struggle, immigration reform and contested land struggles. 25 years ago, he founded Quetzal, alongside a roster of eclectic musicians––Martha González (vocals, percussion), Tylana Enomoto (violin), Juan Pérez (bass), Peter Jacobson (cello) and Alberto Lopez (percussion)––driven by a unified political vision based in social justice, feminism and a fundamental belief in music’s ability to facilitate positive change.

In 2013, Quetzal won a GRAMMY Award for Best Latin Pop/Rock album for ‘Imaginaries,’ a sprawling album of cumbia, R&B, Cuban charanga, Brazilian pandeiro and traditional Son Jarocho music. The intense chemistry of the band, as they jump from one rabble-rousing anthem to the next, is palpable. As a member of the Smithsonian Institution’s distinguished Folkways record label and featured at the U.S. Library of Congress and Kennedy Center’s Homegrown music series, Quetzal has paved a revolutionary path for Chicanx music, joining the ranks of historic folk artists across the Americas and beyond. We sat down with band founder, Quetzal Flores ahead of the band’s free concert at Levitt LA this Friday (8/10). Check out the interview below!

As a band deeply connected to the socio-political fabric of Los Angeles, what principles were Quetzal founded on?

Quetzal (was) founded on principles of humanity, dignity, cooperation and culture as vital life forces for every working community to move from survival to thriving.

Can you tell us about your involvement in Fandango Sin Fronteras?

Fandango Sin Fronteras is the loose name given to the translocal network between political artist communities in Southern California (East LA, Santa Ana, San Fernando Valley) and the southern part of Veracruz, Mexico. We are active participants in this movement through recordings, fandangos, fundraisers, workshops, and other community-driven initiatives.

What was it like to win a GRAMMY and to have your work recognized on such a large scale?

Ultimately, we owe our successes to the community that built us up; it was really beautiful to see how folks in our community took ownership via social media.  The greatest recognition or validation a band like ours ever received came from community leaders in LA’s Legalize Street Vending Campaign.  Other important moments have come while receiving affirmations from musicians who we consider elders and/or peers like Dave (Hidalgo) and Louie (Pérez) from Los Lobos, Joey De Leon or my mentors Lorenzo Martinez and Russell Rodriguez.

How does it feel to have been doing this for 25 years now?

It really doesn’t feel like it’s been that long except when I look in the mirror. It feels amazing to still have energy and passion. We just finished our eighth full length studio album titled “Puentes Sonoros”(Sonic Bridges) to be released in 2019 on Smithsonian Folkways. Last summer we took a trip to Veracruz as a band and did deep hanging out with different folks from the Fandango movement.  We documented a whole lot and got to composing as soon as we got back. The album will be a sonic manifestation of the organic moments while we were there mixed in with these studio recordings. So we’re still going strong!

What kind of change do you want to make in Los Angeles (and beyond) through your music?

My experience as a musician has afforded me some amazing experiences including being hired by two organizations. The Alliance for California Traditional Arts (ACTA) and East Los Angeles Community Corp (ELACC).  My work with ACTA includes being a curator for the Arts In Corrections program which contracts master traditional artists to teach in California prisons. In addition, we are about to launch a Re-Entry program in collaboration with the Wellness Center in Boyle Heights. I’m also the ACTA Program Manager for Boyle Heights where we facilitate an artist fellowship program to support the Building Healthy Communities BH initiative.

What do free concerts mean to you?

Thank goodness for Levitt! Live music events are one of the ways in which people spend time together, get out of their sheltered spaces, experience “convivio,” bond around a song, a feeling or an idea.  This is also the platform where we get to engage with an audience and provoke thoughts and feelings.

Be sure to RSVP for Quetzal’s free concert this Friday (8/10 at Levitt LA!)