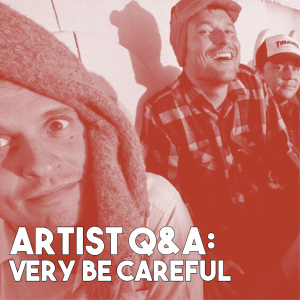 Often credited for popularizing the coastal, tropical-tinged variety of cumbia known as Colombian vallenato, Very Be Careful exudes South American rhythm. Their dedication to combining vibrant flair with traditional sounds (accordion, caja vallenata and guacharacha) has kept the five-man ensemble afloat for more than 20 years, with each of their seven studio albums taking listeners on a musical journey from the Caribbean all the way to California. Very Be Careful’s famous, decades-old tradition of hosting old-school dances for Valentine’s Day, New Year’s Eve and the legendary July Fourth “Cumbia Under The Sparks” rooftop party in Brooklyn continues to bring people together from around the globe in the spirit of vallenato. With the group’s next dance party taking place during their free show at Levitt LA this Friday (8/17), we sat down with VBC’s founders (and brothers) Ricardo and Arturo Guzman to discuss their Los Angeles roots and the future of Colombian music.

How did Very Be Careful’s connection to Colombian vallenato begin?

We all grew up hearing cumbia and other tropical music in our homes through our parents’ records and the LA soundscape. Vallenato was one of them. Though we grew up in the U.S. playing rock, metal, experimental and other genres, we tried out vallenato and it just stuck.

What influence has Los Angeles had on your sound?

We are an absolute byproduct of the LA landscape, the multi-cultures and languages, the segregation and politics of class and race in civic forums and in the community, the drama on the streets and off of them, the way music plays such a big role in bridging, positive competition, and mostly bringing peace and meaning into people’s lives of all class/colors/genders.

What kind of future do you see for Colombian music in America?

Its blowing up finally, although Colombian music has influenced all of Latin America, mostly Cuban, Puerto Rican, and Mexican music became the most widely known. Now people know the influence Colombia has had on those very same genres that other countries popularized.

Tell us about your experience at The Fuji Rock Festival in Japan and what that cultural intersection was like.

Amazing immediate respect and enjoyment by almost all who experienced our live sets. I think their love of Caribbean music, like reggae, mento, mambo, etc., gave them the tools to immediately understand the roots of what we were doing, even if vallenato was super fringe for most listeners there. But they stepped right up to dance and sing along the moment they caught the phonetics of the choruses, even if the meaning wasn’t there yet. And for us? Well – that was such an affirmation that what we were doing was and still is totally just a human thing that goes beyond language and cultures. Japan is an island with tropical weather, so it doesn’t seem all that odd that tropical music would speak to them.

Very Be Careful is known for bringing people together with concerts and parties – why do you think music has this effect?

It is neutral and not “political” in many ways. People look to put down their woes and struggles for a few hours and just enjoy a party that has no velvet rope or dress code. There is no classist agenda or requirements. We bring together the village and introduce new people to it, even if they were too shy or felt not welcome at another music event – ours are all inclusive and peaceful – or at least that is the standard we try and uphold (naturally, not in any contrived way).

What do free concerts mean to you?

It means that something is being done right. If something is free and sustainable, then the entity that is making it possible is doing something in an organized, logical and socially conscious way. Going to clubs and spending a lot of money on drinks, etc. can be fun, but really exclusive. Free brings together the homeless with the rich kids, with the working class, etc. Like the New York subway – we are all in this together. People shouldn’t have to pay to see music, or get healthcare, but of course the artists should get paid fairly – sustainability rocks!