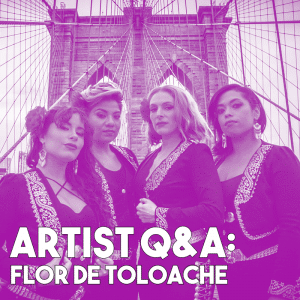 This Saturday (8/25), Flor De Toloache takes the stage at Levitt LA for a free concert! This group has delightfully avoided categorization since their very inception; by appearance, they are mariachi musicians through and through, from their elegant red and black garb to the buoyant, uplifting music that has captured attention worldwide. However, look closer, and you’ll find much more than a mariachi group who broke through to the mainstream––four women and expert musicians who defied decades of gender norms in their most beloved genre to create an intensely versatile version of it. With a large roster of rotating musicians––including Mireya Ramos, Shae Fiol, Julie Acosta, Eunice Aparicio, Luisa Bastidas, Jackie Coleman, Domenica Fossati, Jacquelene Acevedo, Solange Prat, Marilyn Castillo and Rachel Therrien––the band crafts songs that are jubilant yet introspective, humble yet soul-stirring. Flor De Toloache has one foot firmly grounded in tradition, and one always pointed forward. Their canon has explored soul, folk, pop and rock, deftly weaving it into the tapestry of mariachi.

Named after the fabled “love potion” Toloache flower from Mexico, the band earned a Latin GRAMMY Award (2017) for Best Ranchero/Mariachi Album with their debut album, followed by critical acclaim from the likes of Rolling Stone, The New York Times, Billboard Magazine and more. Since then, they’ve made a home at New York City’s Salsa and Latin pop record label, Chulo Records, constantly expanding their musical horizons. In recent years, they’ve recorded with garage-blues outfit The Arcs––headed by The Black Keys’ Dan Auerbach––and LA’s own rising Latin soul group, Chicano Batman. The band is no stranger to Levitt stages either––this summer alone, they’ve treated Levitt audiences to their music at Levitt Pavilion Denver and the Levitt AMP Music Series in St. Johnsbury, Vt.; Utica, NY; and Ocala, Fla. Now, between touring with the likes of Café Tacvba and La Santa Cecilia, the group is headed to Levitt LA for a free concert on August 25! We sat down with bandleaders Shae Fiol and Mireya Ramos for an exclusive Q&A.

How did the group come together and bridge such diverse musical backgrounds? Your members have shared histories across Mexico, Puerto Rico, Cuba, Colombia and many more countries.

Shae Fiol: Mireya (and I) founded the band in 2008. Mireya’s father was a mariachi singer and when she moved to New York City in the late ‘90s, her first gigs were playing around the city with a mariachi, which was mostly men. She noticed a lack of women musicians in the genre, and there were no women mariachi in the city. So she set out to start an all-female mariachi group, and the first person she asked was me! Our multicultural background is a byproduct of our familial history, but also from living in New York City; to be a New York musician, you have to play all kinds of music to survive. Our music is a reflection of our hometown’s diversity.

Mireya Ramos: I had already been playing with (Shae) in a band for a few years then but she had never played mariachi. Nevertheless she was down for the adventure! After learning all the classics of mariachi, we added a personal touch by arranging covers. Eventually, we started writing original songs. We would try a lot of the new material in the subway, where we spent a few years playing first in platforms then under the MTA’s MUNY program.

Your musical collaborations go far and beyond traditional mariachi. Tell us about some of your most exciting work with other musicians and artists.

MR: Collaborating with Dan Auerbach for The Arcs was such a memorable experience. I remember getting the call to do one song for his band and we were so excited! From one song, to half the album and an eventual tour with the group, our experiences with them have really influenced our music.

SF: We’re super excited for our forthcoming collaboration with Diamante Eléctrico to be released, and a recent track called “Los Villanos” that we performed on, alongside No Te Va Gustar. In addition, we have something in the works with Miguel, and a forthcoming single with Making Movies––lots in store!

What was it like to win a GRAMMY and to have your work recognized on such a large scale?

SF: It sounds cliché, but our dream came true. Our peers heard our music and nominated for one of the highest awards in the music industry…it was like fireworks. The last 10 years, since we formed, just replayed on time lapse.

MR: It was such an honor to be recognized amongst other talented musicians. It was such a huge accomplishment, and it took a great deal of hard work to reach that level. It’s been the highlight of our career and has opened the doors for us to do all these exciting upcoming collaborations.

What connection does New York City have to your work?

MR: As a melting pot of cultures, the city has absolutely influenced us. Since we are in one of the most diverse cities in the world, our band is naturally a multicultural band. Our music, attitude, approach and image are all reflective of our environment. Because of our openness, cosmopolitan and inclusive approach to music, our sound is unique. Everyone adds their own touch to this band, it is a true collective of amazing women making heartfelt music, expressing ourselves freely and passionately.

SF: Since we’re all so multicultural, it makes our time together making music and travelling endlessly fun and interesting!

Why is making music accessible important to you?

SF: We are learning to celebrate differences, to be tolerant and compassionate in this country and abroad. Music is boundless––you can understand its sentiment without words, so it brings people together through musical communication. I am so grateful that I am able to do this as my career.

MR: Music is a very powerful universal language and through our genuine expression, we love to connect with people of all ages and cultures. We are also amazed and grateful that we can empower the younger generation by doing what we love, therefore creating a mutual inspiration. The stories that people take from our music, and their love for our work, inspire us to keep going and remind us how important our job is as musicians.

Be sure to catch Flor De Toloache for their only concert in LA all summer, at Levitt LA on Saturday, 8/25!