Join us at the inaugural Indigenous Peoples Day celebration in Los Angeles!

Happy Indigenous Peoples Day! Levitt LA is excited to consciously celebrate our country’s people and history today at LA’s inaugural Indigenous Peoples Day Festival. Running from 7 AM to 8 PM in downtown’s City Hall and Grand Park area, there’s plenty of all-inclusive activities to take part in ­— a 5k run, tons of food vendors, an Indigenous art gallery opening, film screenings, panel discussions and performances by notable Native acts Redbone and The Black Eyed Peas to close out the day. Be sure to catch us at Levitt LA’s community booth in Grand Park and show your support for making LA a more diverse, accepting and equitable community! 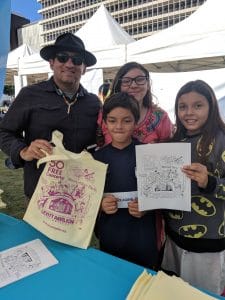 While there are plenty of ways to get involved and honor our nation’s heritage in our city today, Indigenous Peoples Day remains on its way to being celebrated nationwide. The holiday is still officially known as Columbus Day in most parts of the United States, and with that the holiday carries significant baggage tied to the creation of racial divisions in North America that would echo for centuries to come. Historians often blame Christopher Columbus for the initial genocides and colonization that led to a sharp decline in the Native American population.

In recent years, a re-claiming of the dialogue of our nation’s past has been catching on, giving voice to the long-silenced Indigenous voices of our country. Four states (Minnesota, Vermont, Alaska and South Dakota) and 60 cities (including LA, Berkeley, Seattle, Denver, Portland and Austin) officially recognize the holiday as Indigenous Peoples Day.

We at Levitt LA are proud to support Indigenous Peoples Day and LA’s first ever citywide celebration celebrating Native American voices. Be sure to drop by the Levitt LA booth and get involved in the historic dialogue!